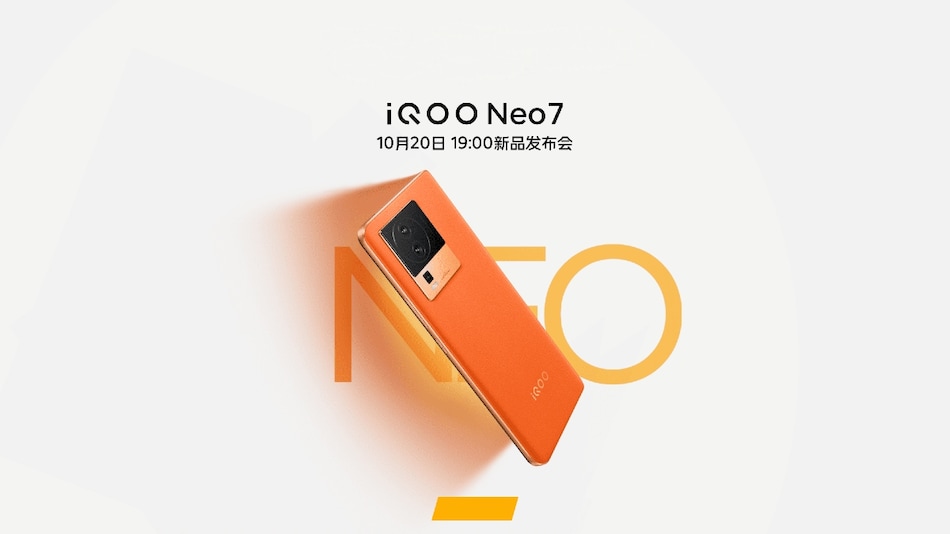 The iQoo Neo 7 appears to have a triple rear camera setup, LED flash

iQoo Neo 7 is confirmed to debut in China on October 20. The official announcement also showcases the rear panel design of this smartphone as well as confirms an orange colour option for this handset. iQoo has not delved into any of its specifications for now. However, we can expect more details to surface in the build-up to its launch. Rumours have suggested that the iQoo Neo 7 could be powered by a MediaTek Dimensity 9000+ SoC and is likely to support 120W fast charging.

iQoo has announced that it will unveil the iQoo Neo 7 during a launch event that is set to take place on October 20 at 7pm local time (4:30pm IST). Pre-booking for this smartphone will also open on the same day. The Vivo sub-brand has kept the first sale date under wraps for now.

The iQoo Neo 7 appears to have a similar rear panel to its predecessor the iQoo Neo 6. However, the camera module design appears to have been altered. It still seems to feature a triple camera setup and an LED flash. The official image also suggests that this smartphone will offer an orange colour option. The smartphone will also offer an 8GB RAM + 256GB storage configuration option.

The company has not revealed the specifications of the iQoo Neo 7. Recently, it was tipped to feature a full-HD+ display with a 120Hz refresh rate. Under the hood, the handset may pack a MediaTek Dimensity 9000+ SoC. It is likely to get a 50-megapixel Sony IMX 766V main camera on the back. Recently, an iQoo product manager had shared an image captured via the iQoo Neo 7 that showcased its great lowlight capabilities.

As per a recent report, the iQoo Neo 7 may pack a 5,000mAh battery with support for 120W fast charging. Some of its other expected features include an optical fingerprint scanner, an IR blaster, and NFC connectivity.