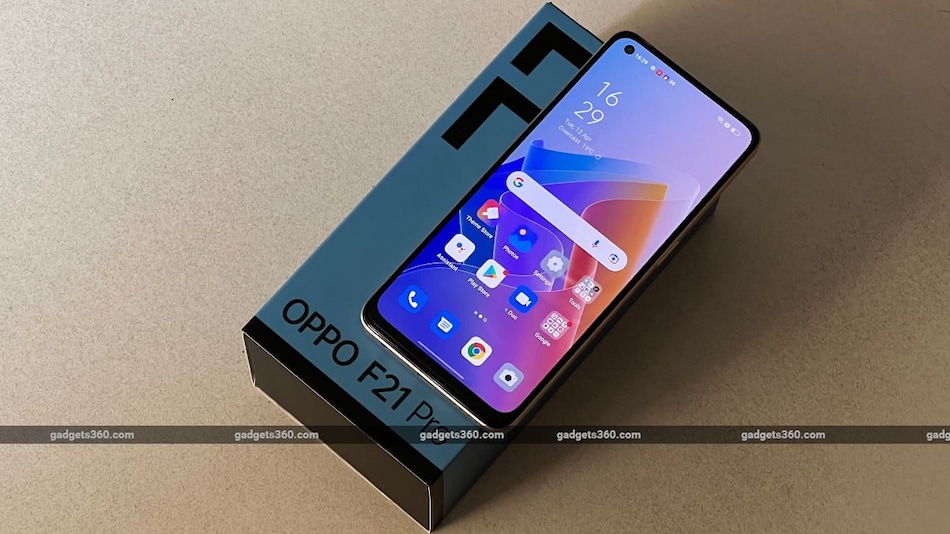 Oppo F21 Pro price in India has been set at Rs. 22,999 for the 8GB + 128GB storage variant. The phone comes in Cosmic Black and Sunset Orange colours — where the latter has a Fiberglass-Leather design at the back that has a grain texture on top. In contrast, the Oppo F21 Pro 5G price in India is set at Rs. 26,999 for the same 8GB + 128GB configuration. The 5G model comes in Cosmic Black and Rainbow Spectrum shades.

Launch offers on the Oppo F21 Pro and F21 Pro 5G include a 10 percent bank cashback and no-cost EMI options.

The Oppo Enco Air 2 Pro carry a price tag of Rs. 3,499. Details on the availability of the earbuds will be available at a later stage.

The Oppo F21 Pro runs on Android 12 with ColorOS 12.1 on top. It features a 6.4-inch full-HD+ (1,080x2,400 pixels) AMOLED display with a 90Hz refresh rate and up to 180Hz touch sampling rate. Under the hood, the phone has an octa-core Qualcomm Snapdragon 680 SoC, along with 8GB of RAM. There is the triple rear camera setup that houses a 64-megapixel primary sensor that is coupled with a 2-megapixel micro shooter and a 2-megapixel depth sensor. An Orbit Light also encircles the micro shooter and works as both a notification indicator as well as a fill light for capturing shots in low lighting conditions. Further, the rear camera setup has an LED flashlight.

Oppo F21 Pro comes with an Orbit Light at the back

For selfies and video chats, the Oppo F21 Pro comes with a 32-megapixel Sony IMX709 camera sensor at the front.

The Oppo F21 Pro comes with 128GB of onboard storage. Connectivity options include 4G LTE, Wi-Fi, Bluetooth, GPS- AGPS, and a USB Type-C port. The phone also supports artificial intelligence (AI) backed gesture controls and includes a feature called Smart Notification Hiding that uses the selfie camera along with a sensing algorithm to hide content if the phone detects someone else is looking at the screen when a new message pops up, the company said.

Oppo has equipped the F21 Pro with a 4,500mAh battery that supports 33W SuperVOOC fast charging. The phone has 7.49mm of thickness for the Cosmic Black colour option or 7.54mm in case of the Sunset Orange shade. It weighs 175 grams.

The Oppo F21 Pro 5G runs on Android with ColorOS 12 on top and features a 6.4-inch full-HD+ AMOLED display that has a 60Hz refresh rate. The phone is powered by an octa-core Qualcomm Snapdragon 695 SoC, along with 8GB of RAM. It comes with a triple rear camera setup that includes a 64-megapixel primary sensor, along with a 2-megapixel depth sensor and a 2-megapixel macro shooter. The 5G phone carries Dual Orbit Lights at the back.

For capturing selfies and enabling video chats, the Oppo F21 Pro 5G offers a 16-megapixel sensor at the front.

Oppo has equipped the F21 Pro 5G with a battery that has the same 4,500mAh capacity that is available on the regular F21 Pro, along with 33W SuperVOOC charging. The phone has 7.49mm thickness (Cosmic Black) or 7.5mm thickness (Rainbow Spectrum) and weighs 173 grams.

Oppo has offered IP54-rated dust and water resistance on the Oppo Enco Air 2 Pro case. There is also a USB Type-C port for charging.

Specifically for users with Oppo ColorOS 11.0+ phones, the Oppo Enco Air 2 Pro offer Quick Pairing support, enabling the earbuds to pair by placing their case near the phone. The earbuds also have an Instant Connection feature for quickly connecting with the paired phone once their charging case is popped open. Further, the earbuds have Automatic Sleep support to reduce power consumption when idle.

The Oppo Enco Air 2 Pro weigh a total of 42.8 grams with the charging case. However, each earbud weighs 4.3 grams.