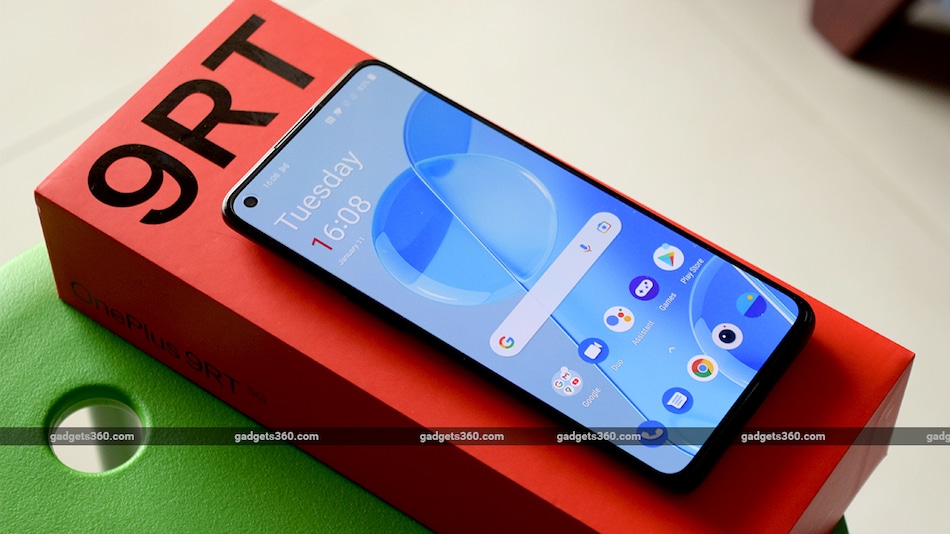 The OnePlus 9RT is the latest and most likely the last smartphone we'll see in the company's 9 series, and if you're not all that excited about it, we don't blame you. The 'T' refreshes of OnePlus phones usually bring minor improvements to design and performance. The OnePlus 7T (Review) was an exception, but the 9RT is exactly that. As I already highlighted in my first impressions of the phone, the updates are mainly to do with the design, SoC, and main rear camera. For existing owners of a OnePlus 9R, it's not a huge upgrade but if you have an older OnePlus phone and were waiting for the right time to make a switch, should you be looking at getting the 9RT? Let's find out.

The OnePlus 9RT is available in two colours, a stealthy Hacker Black and more flashy Nano Silver. As always, there are plenty of cashback offers available at launch time, depending on where you buy the phone from, so you should be able to get a decent discount.

We've covered the new design in our first impressions of the OnePlus 9RT, and after using this phone for about a week, I'm convinced the Hacker Black version is the one to get. The matte, sandstone-like finish for the glass back panel looks very good and is smooth to the touch. It does pick up superficial marks if you run your fingernail across it, but these can easily be wiped away. The redesigned camera module looks good and blends in well with the overall aesthetic of the phone. I think this is one of the best-looking OnePlus phones since the 8 Pro (Review).

The OnePlus 9RT has a good in-hand feel despite its hefty 198.5g weight. The rounded edges of the aluminium frame make it comfortable to hold. It has a relatively large 6.62-inch AMOLED display with a 120Hz refresh rate and a full-HD+ resolution, similar to the OnePlus 9R and OnePlus 9 (Review), but still misses out on the LTPO-type panel that the 9 Pro (Review) uses. It's a very good display nonetheless and it has Corning Gorilla Glass 5 for scratch protection, just like the back panel. A mild shift in hue (blue tone) is visible on a white background when viewing the display off-axis, but for most use cases, you'll hardly notice it.

The OnePlus 9RT looks good from all angles, especially in this Hacker Black finish

OnePlus hasn't succumbed to the trend of reducing bundled accessories. The 9RT comes with a case, USB cable, and 65W charger in the box, along with other things such as stickers.

The second big change lies in the performance of the phone. The OnePlus 9RT uses the Qualcomm Snapdragon 888 SoC making it equal to the OnePlus 9. The really good news though is that this is the only phone in the 9-series to support as many as eight 5G bands, making it more future-proof. OnePlus also says it has gone with three Wi-Fi antennas, instead of the usual two, for better stability while gaming. There's also a new, larger vapour chamber cooling system which promises better heat dissipation. OnePlus has even tweaked the touch response of the 9RT's screen, which can boost to 600Hz (from 300Hz) in certain games.

The 9RT still misses out on an IP rating and wireless charging, which is a little disappointing. Samsung offers these premium features with its FE series of phones, and is crushing it of late with aggressive pricing, especially for the older Galaxy S20 FE 5G which is still very relevant.

My unit of the OnePlus 9RT came with OxygenOS 11.3, which is still based on Android 11. The next version, which is based on Android 12, is under development and should arrive as an OTA update, but there's no telling when that will be. Till then, you can expect a very similar experience from the 9RT as on any other recent OnePlus smartphone. The interface is lean with very little bloatware. You get Google's SMS app as well as the stock dialler app, which does support call recording. There are also plenty of customisations for the accent colours, fonts, and wallpapers.

As a daily driver, the OnePlus 9RT was very dependable during the review period and offers the famed OnePlus experience — a rugged body and speedy software. The in-display fingerprint sensor is lightning quick at authentication, and navigating the phone's menus is quick. Switching between apps was also seamless and it never felt like I was stressing this phone, no matter what I did.

Multimedia playback was good, with standard as well as HDR video rendered well. Streaming apps such as Netflix were able to detect the HDR capability of the display. The stereo speakers sounded good and the Dolby Atmos setting lets you choose from a bunch of different sound profiles. Games also ran very well thanks to the powerful SoC. Fortnite was fun to play and looked good with the graphics quality turned up. The same went for Call of Duty: Mobile. The display's touch response in general was very good during gaming, especially with competitive multiplayer games. The OnePlus 9RT also handled heat very well, and back of the phone only got mildly warm even after prolonged gaming sessions.

Battery life was very good too. The 4,500mAh battery lasted for 20 hours and 16 minutes in our internal test, which runs an HD video clip on loop till a phone shuts off. This is a much longer runtime than what the Oneplus 9R or even the 9 managed, which is a good sign. With ordinary use which included a bit of everything (gaming, calls, camera, social apps), I was easily getting around a full day to even a day and half on one charge. Charging the battery is very quick too. The included Warp Charge 65T charger is capable of charging the battery from zero to full in under 30 minutes.

The OnePlus 9RT may deliver flagship-level performance, but it misses out on certain premium features such as an IP rating and wireless charging

The OnePlus 9RT has an improved primary camera compared to the 9R. It uses the 50-megapixel Sony IMX766 sensor, which is also used as the ultra-wide camera in the 9 and 9 Pro. One special feature of this sensor is support for DOL-HDR, which is its hardware-level ability to automatically capture a high dynamic range video if your subject is framed against bright light. We saw this feature on the OnePlus 9 Pro's primary camera too. Low-light photo quality is also said to have improved.

The rest of the sensors though are similar to what you get on the 9R. These are the 16-megapixel Sony IMX481-based ultra-wide camera, a 2-megapixel macro camera, and a 16-megapixel selfie camera. The macro camera here has a lower resolution compared to the one on the 9R, and the selfie camera is the same one that OnePlus has been using over multiple generations, which is to say it's an average camera for stills with limited video capabilities (1080p video recording only).

The camera app on the 9RT has been lifted straight from sister company Oppo's ColorOS. You get an AI scene enhancement toggle, dual-view video recording, and a Hi-Res mode that combines multiple frames shot by the main camera to give you a 108-megapixel photo.

When shooting during the day, the main camera did a good job capturing details. Colours looked a bit artificial if I had the AI button enabled. Images captured using Portrait mode were a bit of a hit or miss as unwanted portions of the subject tended to get blurred at times. There's only digital zoom up to 10X, but photos still turned out pretty decent as the resolution is high enough to crop into.

The ultra-wide camera offers a wider perspective but with a noticeable dip in quality. The macro camera captures passable photos under good light, but I wouldn't bother with it in low light. The main camera captured the best photos in low light even without Night mode, but they tended to have a heavily processed look once I zoomed in. The ultra-wide camera captured very poor photos in such lighting, and even with AI enabled, it wouldn't automatically use Night mode. The selfie camera managed decent selfies in the daytime but faces generally appeared soft and skin tones weren't the best.

The OnePlus 9RT can shoot up to 4K 60fps video. Under favourable light, video quality is good and videos are stabilised well. The DOL-HDR feature was useful when shooting backlit subjects as it maintained the exposure on the subject very well, although highlights in the background were blown out a bit. Video quality in low light was slightly disappointing, with some graininess and visible jitter when walking, as a side-effect of the stabilisation.

The OnePlus 9RT makes for yet another dependable powerhouse of a smartphone. It's beautifully crafted and offers excellent performance along with stellar battery life. The main camera is a nice improvement over that of the 9R but the rest of them are not great, especially in low light. The 9RT effectively makes the OnePlus 9R and even the OnePlus 9 obsolete. Unless the 9R falls in price drastically, there's no reason to consider that phone.

While the OnePlus 9RT offers better value than to the OnePlus 9, it's still a little too expensive, in my opinion. OnePlus has launched this refresh in India a bit too late, and phones such as the Xiaomi 11T Pro 5G, Realme GT and Samsung Galaxy S20 FE 5G offer better value for money at the moment. If you're thinking of waiting for the OnePlus 10 series to arrive in India before you pull the trigger, then it might be a longer wait than we thought. So far, OnePlus has only announced the 10 Pro, so there's no telling when the 9RT's replacement will actually arrive.

The OnePlus 9RT is a solid flagship that needs a couple of thousand Rupees shaved off its current asking price for it to be a good deal. If you can't wait, Xiaomi, Realme and Samsung have equally enticing offerings at better prices.