Oppo Pad Air was launched in China in May this year. 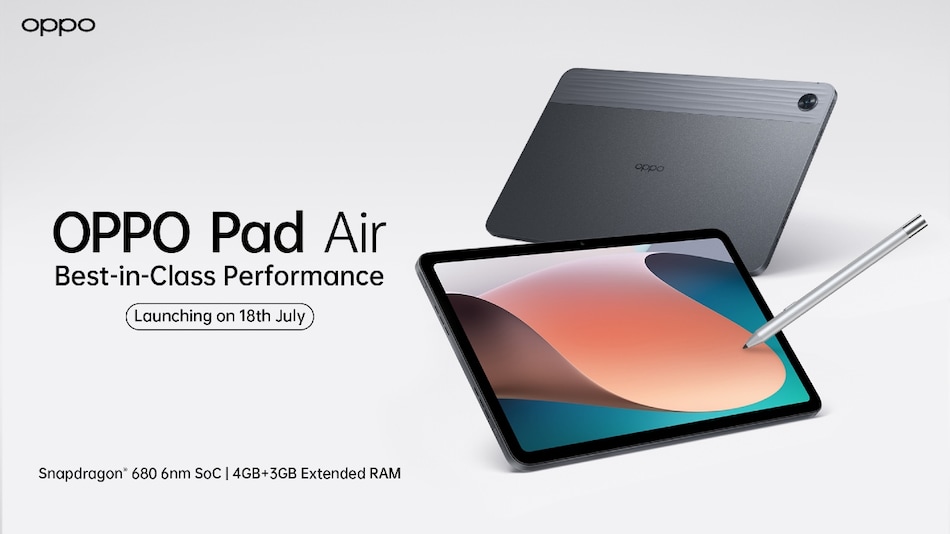 Oppo Pad Air India launch has been set for July 18, the Chinese company has announced. Oppo's first tablet in India will debut alongside the Oppo Enco X2 TWS earphones and the Oppo Reno 8 series of smartphones. The series is expected to offer Oppo Reno 8 and Reno 8 Pro smartphones in India. Both the tablet and the smartphones were launched by the company in May this year. The Oppo tablet comes with a 10.36-inch display and carries a Qualcomm Snapdragon 680 SoC.

As per a press note, a Flipkart landing page, and a tweet by Oppo, the Oppo Pad Air will be launched in India on July 18 alongside the Oppo Reno 8, the Reno 8 Pro, and the Oppo Enco X2 TWS earphones.

The company has already announced that it will launch the Oppo Reno 8 series and the TWS earphones on July 18. Just like the smartphones and earphones, the Oppo Pad Air was also launched in China earlier this year.

The Oppo Pad Air runs Android 12 with ColorOS for Pad on top and features a 10.36-inch display with a 2,000x1,200 pixels resolution. It is powered by an octa-core Qualcomm Snapdragon 680 SoC with up to 6GB of LPDDR4x RAM. For photography, the Oppo Pad Air comes with an 8-megapixel camera sensor at the back and a 5-megapixel camera sensor at the front. It carries up to 128GB storage that supports expansion via a microSD card (up to 512GB). The Oppo Pad Air packs a 7,100mAh battery, which supports 18W fast charging support. The tablet also offers quad speakers with Dolby Atmos support for a surround sound experience.