LDAC Bluetooth codec support makes this a promising option at under Rs. 2,500 in India. 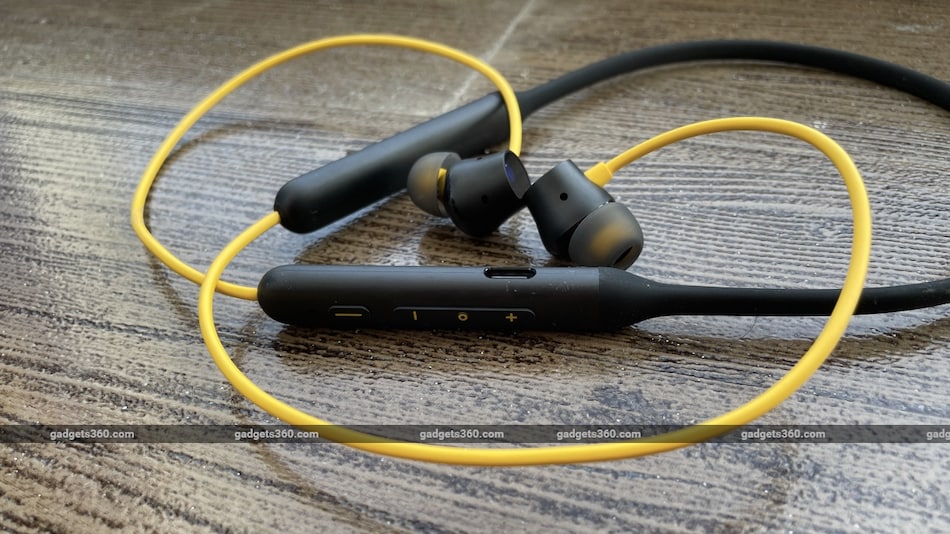 Realme's audio range in India is now largely comprised of true wireless earphones, but the company does have some interesting options beyond that, including wired and wireless earphones, and even portable speakers. The recently launched Realme Buds Wireless 2, which I'm reviewing here, is a wireless neckband-style headset that offers premium features at a very competitive price. Above all, this new headset promises audio quality that matches up to premium standards, while keeping the price firmly in the budget range.

The Realme Buds Wireless 2 is a Bluetooth headset, with cables running from the neckband to the earpieces

ANC and LDAC support on the Realme Buds Wireless 2

The neckband style isn't new to Realme, and neither is the idea of a full-fledged, feature-filled headset such as this. The Realme Buds Wireless 2 is the successor to the Buds Wireless Pro, and has the same positioning and appeal; this is meant to be a headset for discerning users, thanks to active noise cancellation and support for the LDAC advanced Bluetooth codec.

When it comes to design, the Realme Buds Wireless 2 follows an idea that is tried and tested, both by Realme as well as by the personal audio industry in general. The headset has a flexible neckband with modules at both ends, and cables that lead from there to the earpieces themselves. I found these cables perhaps a few centimetres too long; they often rubbed against my face in ordinary use, which was a bit annoying.

I received the black and yellow colour variant – Realme's signature colour combination – but you can also get the plain grey variant. The colours and styling make the Buds Wireless 2 strongly resemble the Buds Wireless Pro, but there are small differences. For example, the outer sides of the earpieces have an interesting reflective pattern that make them appear translucent, which looks quite nice.

The Realme Buds Wireless 2 headset has magnetic power controls – snapping the backs of the earpieces together magnetically turns the headset off, and separating them turns it on. There are also controls on the right side of the neckband for volume, playback, answering calls, and to control the active noise cancellation and transparency modes. Double-pressing the ANC button lets you quickly swap between the two most recently paired source devices.

The earpieces look good, with a design and texture that mimics the effect of being translucent

Other key features of this headset include an 88ms low-latency mode, Bluetooth 5 with support for the LDAC, AAC, and SBC Bluetooth codecs, and Google Fast Pair support. The earphones have 13.6mm dynamic drivers, and are said to be tuned in collaboration with popular electronic music duo The Chainsmokers.

The headset is IPX5 rated for water resistance. It works with the excellent Realme Link app which allows for control over the ANC and transparency modes, gaming mode, and equaliser settings. The box includes three pairs of silicone ear tips and a USB Type-C charging cable.

Advanced Bluetooth codec support goes a long way in determining how a pair of wireless headphones or earphones will sound, and Sony's LDAC codec is widely considered the best one right now. It's widely supported on Android devices, and many audio manufacturers use it to good effect.

Realme itself had implemented LDAC on the Buds Wireless Pro, so it isn't surprising that the Buds Wireless 2 gets it too. I used the Realme Buds Wireless 2 with a OnePlus 7T Pro McLaren Edition for this review, with the LDAC codec in operation. I listened to audio tracks on Apple Music, took calls, and used the headset when watching some videos on the device as well.

Realme has collaborated with electronic music duo The Chainsmokers for the Buds Wireless 2, and its bass-heavy sonic signature does suggest the motive behind this. The earphones are well suited to electronic music, with tight bass and clean sound. Starting with Closer by The Chainsmokers, the punch and drive in the bass was immediately evident, audibly striking stronger than the rest of the frequency range.

The power control is magnetic – snapping the earpieces together turns the headset off, while separating them turns it on

That said, there was still a reasonable amount of detail, plenty of sparkle in the highs, and a fair response to the vocals. Halsey's vocals in particular sounded sharp, and managed to power through even the strong beats and low-end attack. All through this track, the Realme Buds Wireless 2 offered up plenty of detail while retaining the low-end biased sound.

Listening to the fast-paced house classic Fade Into Darkness (Albin Myers Remix) by Avicii, the attack in the bass was even more determined and powerful. At no point did it feel muddy or awkward with relation to the rest of the response range. Bass-happy listeners will like how tight and punchy the sound is on the Realme Buds Wireless 2, and the loud volumes and drive are enough to drown out just about anything else in the background even if you turn active noise cancellation off. However, this aggression in the bass can cause a bit of listener fatigue at high volumes.

There is also environmental noise cancellation for better audio on calls, and call quality itself is decent on the headset. Connection stability wasn't a problem for the most part at distances of up to around 3m between the headphones and smartphone. LDAC's adaptive bitrate allowed for steady audio streaming with no buffering issues.

As with many of Realme's products, the Buds Wireless 2 is value-driven and gets a lot right. Impressive specifications and features, app support, and an enjoyable bass-driven sonic signature make this quite easily the best pair of wireless earphones you can buy for less than Rs. 2,500 in India right now. Many people might find the neckband style a bit dated, and battery life is average, but the benefits do outweigh the drawbacks here.

There aren't many capable options in this segment right now, but you could also consider the OnePlus Bullets Wireless Z, or more affordable models from brands such as Dizo and Blaupunkt, or true wireless options such as the Realme Buds Q2. However, the Realme Buds Wireless 2 is well worth the investment, thanks to active noise cancellation and decent sound.