Xiaomi will also unveil the Mi QLED TV 75, its largest TV yet, at the launch event today. 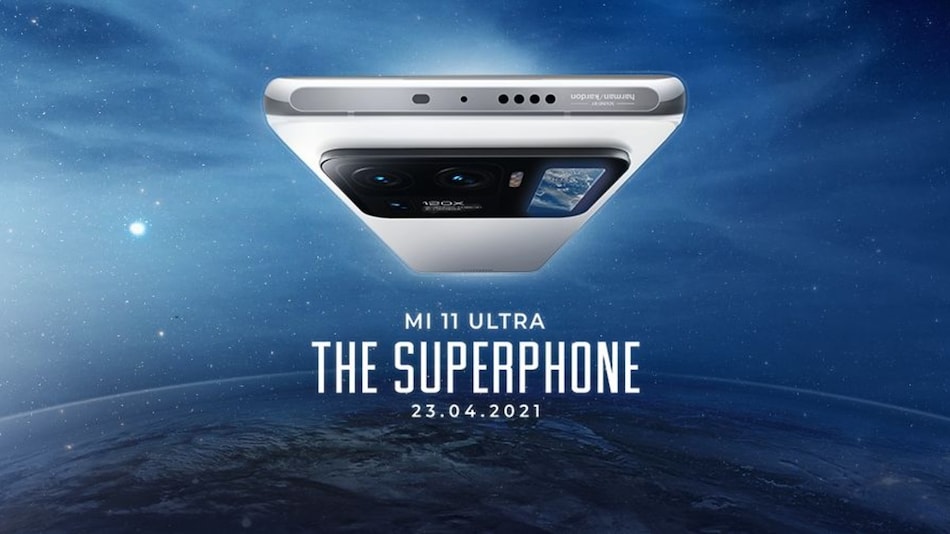 Mi 11 Ultra and the new Mi 11X series phones are confirmed to launch in India at Xiaomi's dedicated event today, Friday April 23. The Xiaomi Mi 11 Ultra was unveiled in China last month and the company has confirmed its arrival in the Indian market. The Xiaomi Mi 11X series is rumoured to include the Mi 11X and Mi 11X Pro phones and these are expected to be rebranded versions of the Redmi K40, and Redmi K40 Pro+, respectively. The Redmi K40 series from Xiaomi was launched in China earlier this year and has not been launched in the Indian market. Alongside, Xiaomi is looking to launch the Mi QLED TV 75 as well.

Xiaomi's launch event will begin at 12pm (noon) on Friday April 23, and will be livestreamed on the company's YouTube channel as well as through its other social platforms. The company has confirmed that the Mi 11 Ultra, Mi 11X series and Mi QLED TV 75 will be launched during the event.

A recent leak suggests that the Xiaomi Mi 11 Ultra may be priced at over Rs. 70,000 in India. If true, this will be the most expensive smartphone launched by Xiaomi in India since its arrival in the country back in July 2014. The phone will be sold online on Amazon India and Mi.com, at the very least. Offline availability details have not been made clear as yet.

Lastly, the Mi QLED TV 75 from Xiaomi is expected to be priced at under Rs. 1,50,000 — as most other brands with televisions this size are priced considerably higher.

As the phone has already been unveiled in China, we know the specifications of the Xiaomi Mi 11 Ultra already. It runs on MIUI 12 based on Android 11, featuring a 6.81-inch 2K WQHD+ (3,200× 1,440 pixels) E4 AMOLED quad-curved display with a 120Hz refresh rate. The phone also has a 1.1-inch (126x294 pixels) AMOLED secondary touch display on the back. This display can be used for taking selfies, see notification alerts, battery info, time, and weather details. It is powered by a Qualcomm Snapdragon 888 SoC, paired with up to 12GB LPDDR5 RAM, and up to 512GB UFS 3.1 storage.

Connectivity options on the phone include 5G, 4G VoLTE, Wi-Fi 6, Bluetooth 5.1, GPS, NFC, and a USB Type-C port for charging. The phone also comes with Harman Kardon stereo speakers, is IP68 certified, and has an in-display fingerprint sensor. There is a 5,000mAh battery inside the Mi 11 Ultra with 67W wired as well as wireless fast charging support, along with 10W reverse wireless charging.

If the Xiaomi Mi 11X and Mi 11X Pro are indeed rebrands of the Redmi K40 and Redmi K40 Pro+, respectively, then their specifications should also be more or less identical to the China models.

In terms of optics, the series may come with triple rear cameras. Mi 11X may carry a 48-megapixel primary rear sensor and Mi 11X Pro could carry a 108-megapixel Samsung HM2 primary sensor. Both phones could be backed by 4,520mAh batteries with support for 33W fast charging.

The Mi QLED TV 75 specifications are likely to be similar to the Mi TV Q1 75-inch, listed on the company's global website. It will include a 75-inch QLED screen, run on Android TV 10, offer hands-free access to Google Assistant, and support Dolby Vision HDR and Dolby Audio. There will also likely be some India-specific customisations to both the software and hardware, along with some recent features for PatchWall such as the Mi Home app. Xiaomi also announced that the 75-inch television will be made in India, with the company manufacturing all of its Indian models and variants in India itself.