OnePlus 10T was launched in India on Wednesday as the company’s mid-year refresher phone. 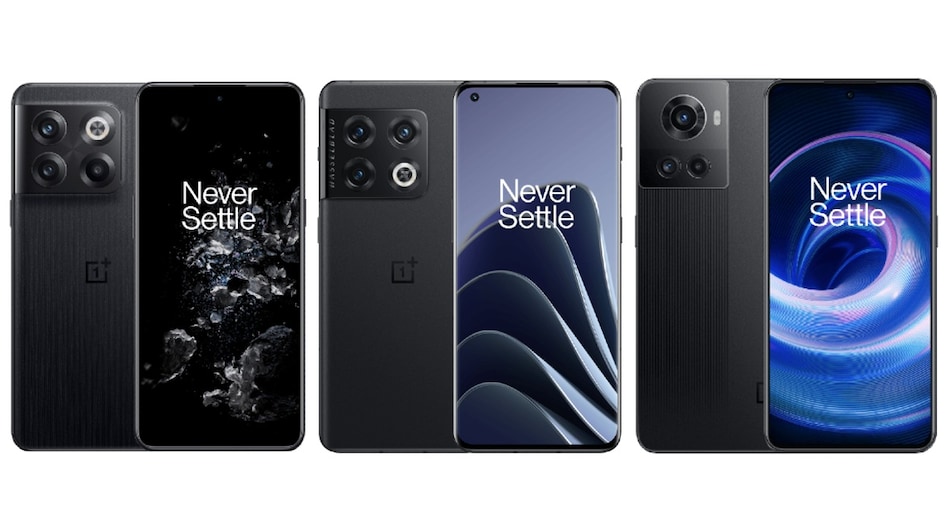 All the three phones come in two colour options

OnePlus 10T was launched globally, including India, on Wednesday, with the flagship Snapdragon 8+ Gen 1 SoC and 150W SuperVOOC Endurance Edition fast wired charging. In our first impressions, we found that the handset will appeal to a bunch of people, typically gamers, who are in for a powerful SoC and fast charging capabilities. Though the ‘T' model of a OnePlus smartphone is expected to be mid-year spec bump of a handset, things were different this year. There is no OnePlus 10, hence, the 10T is essentially a watered-down version of the OnePlus 10 Pro. In the mix is the OnePlus 10R, which commands a lower price than the OnePlus 10T and offers a decent mix of hardware and software.

In comparison, the OnePlus 10 Pro was launched at a commanding price of Rs. 66,999 for the base 8GB RAM + 128GB storage variant, and Rs. 71,999 for the 12GB RAM + 256GB storage version. It features two distinct colour options — Emerald Forest and Volcanic Black.

Starting with basics, all the three phones: the OnePlus 10T, the OnePlus 10 Pro, and the OnePlus 10R have dual-SIM (Nano) slots and run on Android 12 with OxygenOS 12.1 on top. They also have identical screen sizes as well, but there's a difference in the technology.

When it comes to photos and videos, the OnePlus 10T gets a triple rear camera setup headlined by a 50-megapixel Sony IMX769 primary sensor with an f/1.8 lens and optical image stabilisation (OIS). There is also an 8-megapixel ultra-wide shooter that is paired with f/2.2 lens and a field-of-view of 119.9 degrees. There is a 2-megapixel macro camera. For selfies and video chats, the OnePlus 10T carries a 16-megapixel camera sensor paired with f/2.4 lens at the front.

The OnePlus 10 Pro also features three cameras at the back. It houses a 48-megapixel Sony IMX789 primary sensor, with an f/1.8 lens and optical image stabilisation (OIS). The camera setup also includes a 50-megapixel Samsung ISOCELL JN1 sensor paired with an ultra-wide lens that has a field-of-view of 150 degrees. Additionally, the camera setup is equipped with an 8-megapixel telephoto shooter that is paired with OIS support. There is a 32-megapixel Sony IMX615 camera sensor at the front.

The OnePlus 10R 5G also gets a triple rear camera setup that is pretty similar to the OnePlus 10T: a 50-megapixel Sony IMX769 camera, an 8-megapixel ultra-wide shooter, and a 2-megapixel macro camera. It gets a 16-megapixel front camera for selfies and video calling.

The OnePlus 10T, OnePlus 10 Pro, and the OnePlus 10R are equipped with up to 256GB of UFS 3.1 storage. Connectivity options include 5G, 4G LTE, Wi-Fi 6, Bluetooth v5.2 (Bluetooth v5.3 in case of OnePlus 10T), GPS/ A-GPS, NFC, and a USB Type-C port. The phones come with in-display fingerprint sensors and Face Unlock features for security. There are dual stereo speakers with Dolby Atmos and noise cancellation support.

Is Pixel 6a the best camera phone under Rs. 50,000? We discuss this on Orbital, the Gadgets 360 podcast. Orbital is available on Spotify, Gaana, JioSaavn, Google Podcasts, Apple Podcasts, Amazon Music and wherever you get your podcasts.
Affiliate links may be automatically generated - see our ethics statement for details.
OnePlus 10T 5G vs OnePlus 10R 5G Endurance Edition vs OnePlus 10 Pro comparison

Toyota Profit Down Amid Chip Shortage, EV Business Has Been the Worst Hit
Crypto Too Volatile to Be Payment Tool, It Is Asset: Mastercard CFO Sachin Mehra