Alongside Halo, The Adam Project, Rudra: The Edge of Darkness, Sutliyan, Undekhi season 2, and Eternally Confused and Eager for Love. 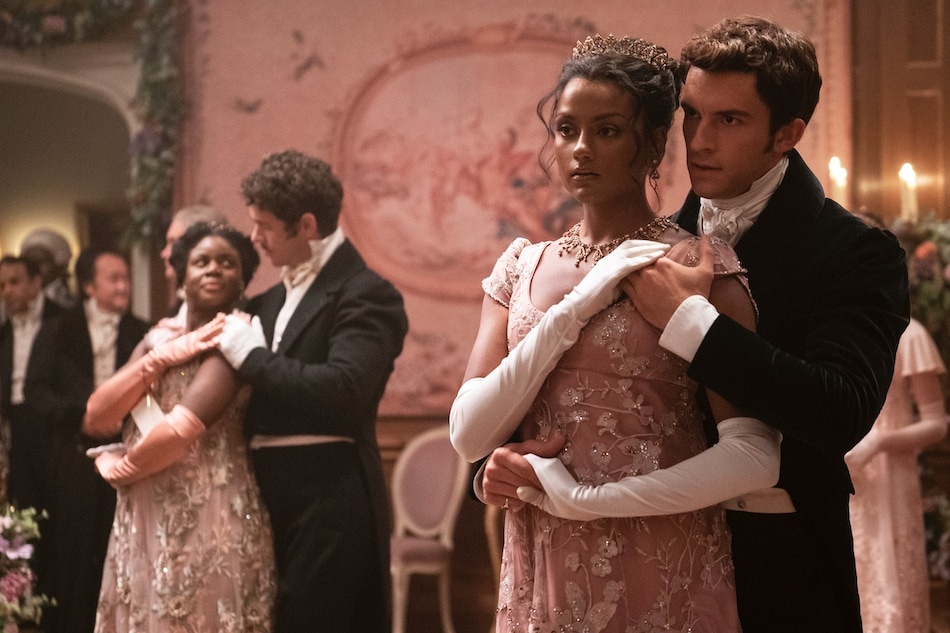 What are the biggest OTT movies and TV series in March? Bridgerton is by far the biggest name, with Netflix period drama's second season dropping on March 25. The new month will close out with a new Marvel property in Moon Knight — that mixes Oscar Isaac and Egyptian mythology — starting March 30 on Disney+ Hotstar. Before those two, we will be treated to a new Ryan Reynolds sci-fi movie with The Adam Project, streaming March 11 on Netflix. Fans of sci-fi and time travel can also try out the series adaptation of the Halo video games that begins March 24 on Voot Select in India, return to the world of Star Trek: Picard as season 2 beams in March 4 on Amazon Prime Video, or immerse themselves in the adventures of Outlander season 6 from March 7 on Netflix.

Elsewhere in March, Ben Affleck and Ana de Armas lead psychological thriller movie Deep Water, coming March 18 to Prime Video. While over on Apple TV+ on the same day, Jared Leto and Anne Hathaway begin telling the story of WeWork in the miniseries WeCrashed. A week earlier on Apple TV+, we get another miniseries in The Last Days of Ptolemy Grey, where Samuel L. Jackson suffers from dementia. Emily in Paris' Lily Collins is caught in a break-in at a tech giant's vacation home in Windfall, out March 18 on Netflix. Emmy-winner Toni Collette is haunted by her family's secret past in Pieces of Her, available March 4 on Netflix. And the extraordinaire Pamela Adlon closes out her comedy-drama series Better Things, with final season kicking off March 5 in India on Disney+ Hotstar.

From India in March, the world of OTT gives us Ajay Devgn in his first episodic role with Rudra: The Edge of Darkness — all episodes are out March 4 on Disney+ Hotstar. Prime Video will offer a new Vidya Balan and Shefali Shah-starrer movie in Jalsa, releasing March 18. And over on Netflix, we have a millennial coming-of-age rom-com series Eternally Confused and Eager for Love, also arriving March 18. And on March 4, we will get three more Indian original series in the family drama Sutliyan on Zee5, the crime thriller Undekhi season 2 on SonyLIV, and college politics drama Jugaadistan on Liongsate Play.

March also brings a new Pixar movie straight into our homes, with Turning Red arriving March 11 on Disney+ Hotstar. Castlevania producer Adi Shankar offers up a superhero series in The Guardians of Justice, punching in March 1 on Netflix, that will move between various animated formats and even live-action. Following it, another superhero series moves from live-action to animated with the spin-off The Boys Presents: Diabolical arriving March 4 on Prime Video. If you want more R-rated animated content, Human Resources is the first Big Mouth spin-off, coming March 18 to Netflix.

Similar to the WeCrashed concept, The Dropout follows another disgraced tech executive in Theranos CEO Elizabeth Holmes (Amanda Seyfried). The Dropout will be available on Disney+ Hotstar, but a date has not been revealed. That leaves Amazon's failed afterlife comedy Upload which is nonetheless returning for season 2, March 11 on Prime Video. Disney delivers a Cheaper by the Dozen reboot March 18 on Disney+ Hotstar. And Apple gives us its first tri-lingual series with Pachinko, telling the story of four generations of a Korean immigrant family. Pachinko starts March 25 on Apple TV+.

And though this isn't an OTT original, Bond fans can look forward to the streaming premiere of Daniel Craig's fifth and final chapter, No Time to Die, from March 4 on Prime Video in India.

Over in the realm of documentaries, the pulsating Formula 1: Drive to Survive is back with season 4 March 11 on Netflix.

You can read more about some of these movies and web series below. We don't have the time to talk about all of them in detail — but you can find the full list for a quick perusal at the very end.

When: March 4
Where: Disney+ Hotstar

All Rudra episodes will be available on release date.

Watch the Trailer for Rudra: The Edge of Darkness

When: March 5
Where: Disney+ Hotstar

In its fifth and final season, Pamela Adlon's brilliant series learns from the past and looks to the future — with actress and single mother Sam Fox (Adlon) realising she has given little time to herself, what with raising three daughters (Mikey Madison, Hannah Alligood, and Olivia Edward) who have come of age, and managing her mother (Celia Imrie) who grows visibly older every day. And Sam isn't getting any younger herself.

Danny Trejo, Lena Waithe, Ron Cephas Jones, Casey Wilson, Angela Kinsey, and Lennon Parham will guest star in Better Things season 5. The multi-hyphenate Adlon directs every single episode like she has since season 2, and is credited as writer on many of them, including the season opener and series finale. Better Things season 5 premieres with two episodes, with the remaining eight following one apiece every Tuesday in India.

Better Things airs on FX Monday nights in the US, and streams Tuesdays on Hulu in the US. It is expected in March on Disney+ Hotstar in India.

When: March 11
Where: Netflix

Ryan Reynolds reunites with Free Guy director Shawn Levy on this sci-fi adventure that follows time-travelling pilot Adam Reed who goes from 2050 to 2022 to confront his late father (Mark Ruffalo). There, he enlists the help of a teenage version (Walker Scobell) of himself. There's a lot of futuristic tech in here, including what looks like a rip-off of a dual-bladed lightsaber.

When: March 11
Where: Disney+ Hotstar

In Pixar's latest coming-of-age movie, thirteen-year-old Chinese-Canadian dorky girl Mei Lee (Rosalie Chiang) transforms instantly into a giant red panda anytime she gets overexcited. It's a visual representation of puberty and its associated changes. Turning Red is the first Pixar film with a Chinese character, the first to take place in Canada, and the first directed solely by a woman.

Set in early-2000s Toronto, Turning Red showcases the city's multiculturalism, be it Mei herself, or her Indian-Canadian friend Priya (Maitreyi Ramakrishnan, from Netflix's Never Have I Ever). Ava Morse, Hyein Park, Tristan Allerick, and Addie Chandler play Mei's friends and classmates. Sandra Oh voices Mei's mother, Wai Ching Ho is her grandmother, and Orion Lee is the father.

Domee Shi, an Oscar winner for the Pixar short Bao, makes her feature film directorial debut on Turning Red. It was originally slated for theatres, but Disney moved it to Disney+ and Disney+ Hotstar citing concerns around the ongoing coronavirus pandemic. Though many see it as a way to fuel its platform, given Soul and Luca also went through this.

Alongside, you can also stream the making-of special, Embrace the Panda.

When: March 18
Where: Amazon Prime Video

Ben Affleck and Ana de Armas lead this psychological thriller based on Patricia Highsmith's 1957 novel of the same name, about a loveless marriage where the wife (de Armas) is allowed to take as many lovers as she wants as long as she doesn't desert the husband (Affleck). But deadly games are afoot in Deep Water as her lovers start dropping dead one after another.

Available on Hulu in the US, and Prime Video elsewhere.

When: March 18
Where: Netflix

Confused and awkward twenty-four-year-old Ray (Vihaan Samat) navigates the daunting 21st-century world of romance with the help of Wiz (Jim Sarbh), a personification of Ray's inner voice, who tells us what Ray cannot say out loud. Naturally then, Ray makes all the wrong turns while trying to understand if he wants sex, love or a relationship.

All episodes will release at once on Netflix.

When: March 18
Where: Amazon Prime Video

Vidya Balan and Shefali Shah play a celebrated journalist and her cook, respectively, in this social thriller drama that depicts a “tale of conflict” and reportedly revolves around class differences in society. Suresh Triveni, who worked with Balan on Tumhari Sulu, returns as director on the Amazon original movie.

Jared Leto and Anne Hathaway lead this Apple miniseries about the rise and fall of office rental startup WeWork — and by association, its co-founder Adam Neumann (Leto) and his wife Rebekah (Hathaway) who served as WeWork's chief brand and impact officer. WeCrashed is based on the Wondery podcast of the same name by Lee Eisenberg and Drew Crevello.

WeCrashed premieres with three episodes upon launch, with the remaining five episodes following one at a time on successive Fridays.

When: March 24
Where: Voot Select

Nine years after being put into development, the live-action series adaptation of the popular Xbox game franchise is finally here.

Set in a new “Silver Timeline” that allows it to tell new stories (and hence makes it non-canon to the video games), Halo depicts a 26th-century conflict between interstellar mankind and the alien race Covenant through the perspective of Spartan supersoldier Master Chief (Pablo Schreiber).

In a move that further moves it away from the games and sounds reminiscent of The Book of Boba Fett, Halo will find Master Chief taking off his helmet. To be fair, he doesn't do that in games only because it allows gamers to imagine themselves as the player character.

New Halo episodes will drop weekly on Voot Select in India, and Paramount+ in the US. Already renewed for season 2, though showrunner Steven Kane won't return. This after Halo lost co-showrunner Kyle Killen prior to filming.

When: March 25
Where: Netflix

Netflix's top English-language original series returns for its second season — drawn naturally from Julia Quinn's second novel in her Bridgerton series — without Regé-Jean Page, as we've known since the end of the first season. We will now follow the eldest Bridgerton sibling Anthony (Jonathan Bailey) as he looks for a potential wife candidate in Kate Sharma (Sex Education's Simone Ashley).

All season 2 episodes will drop at once on Netflix. And don't worry about being left on the hook, as Bridgerton has already been renewed for two additional seasons.

When: March 30
Where: Disney+ Hotstar

Jeremy Slater (Netflix's The Umbrella Academy) is the creator on Moon Knight. Directorial duties on the six episodes are split between Mohamed Diab, and Justin Benson and Aaron Moorhead. New Moon Knight episodes will air weekly on Disney+ and Disney+ Hotstar.

The Last Days of Ptolemy Grey

The Guardians of Justice

Cheaper by the Dozen

TikTok Asked by Russia to Not Recommend Military Content to Minors
Facebook-Parent Meta to Block Access to Russia’s RT, Sputnik in EU Amid Ukraine Crisis