Vivo Y75 is marketed as a slim smartphone. 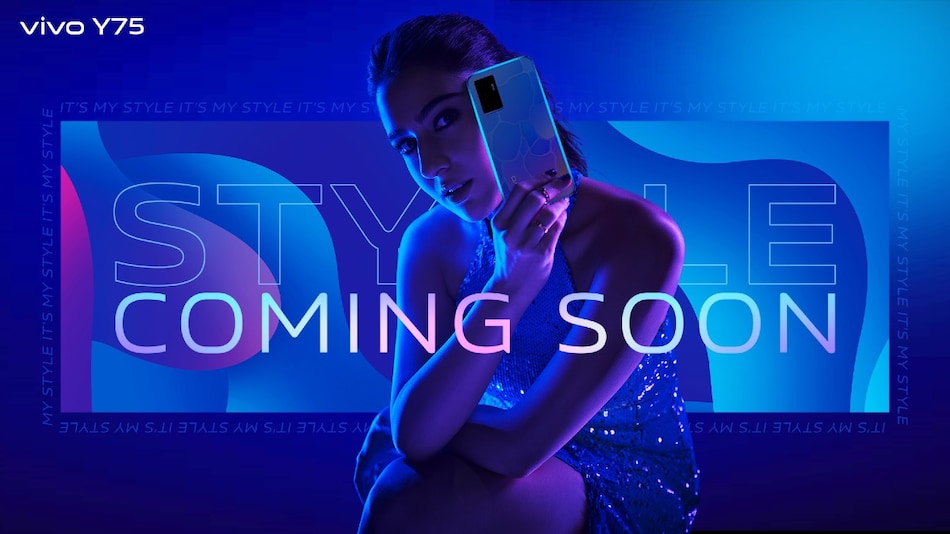 Vivo Y75 will have a designer back panel

Vivo Y75 launch in India has now been officially teased. The Chinese smartphone company has posted two teasers which suggest that the Y-series phone will make its debut in the country in the coming days. Meanwhile, a tipster has revealed the alleged specifications of the Vivo smartphone. The leaked information suggests that the Vivo Y75 may sport a 6.44-inch AMOLED display, could be powered by a MediaTek Helio G96 SoC, may feature a triple rear cameras headlined by a 50-megapixel primary sensor, and is expected to launch in two colour options.

Vivo teased the Vivo Y75 smartphone via an image, and a short video shared in two different tweets. The tweets suggest that the phone will have a slim profile. The teasers show a distinct-looking back panel that offers a multi-coloured effect. There seems to be a triple rear camera setup along with a pill-shaped LED flash in a rectangular module.

Here's the super gorgeous and uber stylish @SaraAliKhan exploring the all-new vivo Y75, a slim and stylish phone for the fashionista in you! ????​

While there is no official information about the phone's internals from Vivo, tipster Paras Guglani has tweeted an image that lists alleged specifications of the upcoming Vivo Y75. As per the tipster, the Vivo Y75 will be a 4G phone, and run FuntouchOS 12 based on Android 11. It is said to sport a 6.44-inch full-HD+ AMOLED display. Under the hood, the phone is claimed to come equipped with a MediaTek Helio G96 SoC paired with 8GB of RAM, which can be extended by up to 4GB.

The Vivo Y75 will get 128GB inbuilt storage (expandable up to 1TB), the tipster suggests. It is claimed to pack a 4,050mAh battery with support for 44W fast charging. Connectivity options on the phone are said to include dual-band Wi-Fi, Bluetooth v5.2, and a 3.5mm audio port. The phone could get an in-display fingerprint sensor, and may debut in Dancing Waves as well as Moonlight Shadow colour options. It may measure 7.36 or 7.41mm, and weigh 172 grams.

The development comes when Vivo is all geared up for the launch of Vivo X80 series in India on May 18. The series comprises the Vivo X80 and Vivo X80 Pro smartphones.