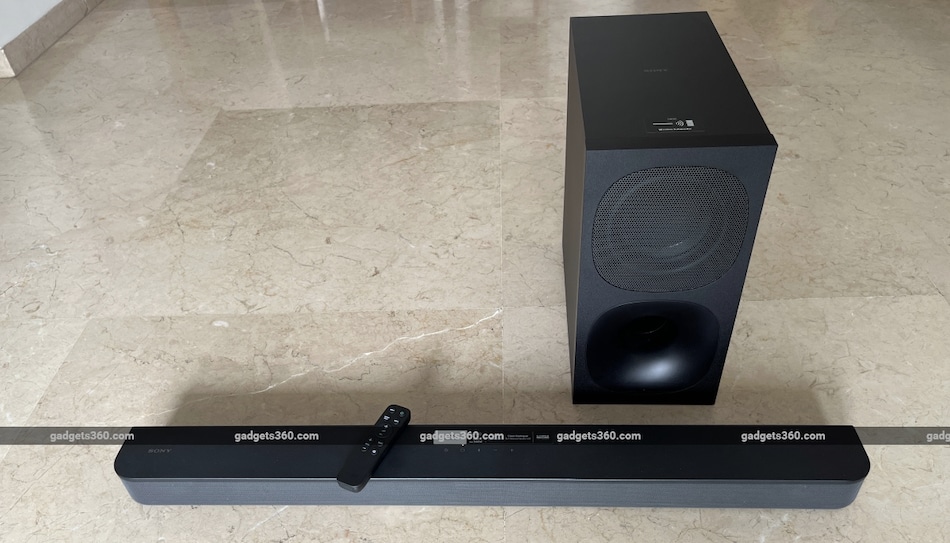 Sony is among the biggest names in the soundbar and home entertainment speaker segment, but most of the Japanese brand's mainstream options are in premium price brackets. Buyers with a budget of around Rs. 25,000 or less usually need to look at options from brands such as JBL and Polk Audio, or very affordable products from Blaupunkt, Zebronics, and the like. Sony's latest soundbar, the HT-S400, gives it a solid presence in the somewhat affordable soundbar space, and promises capable performance at a reasonable price.

Priced at Rs. 21,990, the Sony HT-S400 is a 2.1-channel soundbar that focuses on the important stuff, including design, connectivity, and ease of setup. With a wireless subwoofer, a rated sound output of 330W, and both wired and wireless connectivity options, is this the best reasonably-priced soundbar system you can buy right now? Find out in this review.

The 2.1-channel Sony HT-S400 has a two-driver soundbar and a wireless subwoofer

Although considerably more affordable than the Sony HT-S40R soundbar, the newer HT-S400 looks and feels better, thanks to a nicer grille at the front, and an interesting texture on the body. That said, it's still discreet and rather easy to miss entirely, which is exactly what a soundbar should look like. The size of the bar speaker suggests that it's best used with a 43-inch television, although I tested it with a 55-inch television for this review.

Of course, the lower price of the Sony HT-S400 is because of the considerably different key specifications. Unlike the 5.1-channel HT-S40R, this is a 2.1-channel soundbar, with a single two-channel bar speaker, and a separate wireless subwoofer. The rated sound output is also a fair bit lower at 330W, split between the 130W subwoofer and 200W bar speaker. The subwoofer weighs 7.3kg and only supports wireless connectivity with the 2.4kg bar speaker, with the latter serving as a master device and handling connectivity with external devices.

The sales package of the Sony HT-S400 includes power cables for the bar speaker and subwoofer, an optical (Toslink) audio cable for wired connectivity, and a small remote (along with batteries). The bar speaker has a small monochrome OLED display at the front, which displays basic information, including the audio source and volume levels.

At the top of the bar speaker are the touch-sensitive buttons, which can be used to control power, volume, and audio source even without the remote. The back of the speaker has two ports — HDMI and Optical (Toslink) — for wired connectivity, and there is also Bluetooth 5 for wireless connectivity, with support for the SBC codec.

The remote of the Sony HT-S400 soundbar system is small and rather convenient, is powered by two AAA batteries, and has just a few buttons on it to control the basic features and customisations. This includes core functions such as power, volume, and source selection, along with the ability to adjust the subwoofer volume level to adjust the bass, and a couple of selections to optimise the sound for voice or Sony's Sound Field mode.

The remote of the Sony HT-S400 soundbar system is small and convenient, and lets you adjust the subwoofer volume to tweak the bass level

The Sony HT-S400 is quite easy to setup. The bar speaker and subwoofer did, of course, need to connect to separate power sockets, but the wireless connectivity meant that there was no wire between the two components themselves. Sony's proprietary wireless connectivity protocol worked reliably, with the subwoofer immediately connecting to the bar speaker when the latter was powered on, and maintaining a stable connection. I used HDMI ARC for connectivity with the TV for my review, along with occasional Bluetooth connectivity to listen to music from my smartphone.

Other features on the Sony HT-S400 include HDMI CEC, TV Wireless Connection (which allows for wireless connectivity with Sony Bravia TVs without using Bluetooth), and support for the Dolby Digital audio format. HDMI CEC worked well, and I was able to control the Sony HT-S400 (basic functions such as volume) even with the remote of the Chromecast with Google TV that I had connected to my television, while turning the TV on or off similarly controlled the power of the soundbar system when using HDMI ARC for connectivity.

The Sony HT-S400 is not a particularly complicated or heavily-equipped soundbar system. The 2.1-channel setup means that it has to downmix higher-resolution audio formats to stereo for output, and the actual length of the bar is the only differentiator between the HT-S400 and an ordinary three-piece stereo speaker system. However, despite its technical shortcomings, the Sony HT-S400 delivers surprisingly straightforward performance which is a considerable improvement over most television speakers.

The speaker arrangement also means that the Sony HT-S400 is particularly good with music, and does a fair job of making even movies and television shows sound louder and better. I found the sound to be clean, the soundstage to be reasonably spacious, and the sonic signature to be fairly balanced. The subwoofer wasn't too powerful for the bar speaker, and the two components worked well together.

Connectivity options on the Sony HT-S400 include HDMI, Optical (Toslink), and Bluetooth

Of course, the somewhat basic driver arrangement means that the Sony HT-S400 is unconcerned by advanced audio formats, having to even downmix the basic 5.1-channel encoding that most modern content on streaming services provide. It did a decent job with this nonetheless, regardless of the kind of content I watched. The spaciousness of the soundstage was particularly nice to listen to, especially with movies such as The Gray Man and The Batman where the background score and sounds made a big difference to the viewing experience.

Where the Sony HT-S400 really makes a difference is in how loud it can get. With a rated output of 330W between the bar speaker and subwoofer, the soundbar system is considerably louder than what most televisions — budget or premium — are able to deliver. With the volume turned up, the HT-S400 soundbar system was able to produce a loud, wide, and straightforward sound that worked with all kinds of content. Voices were sharp, background scores were distinct and clean, and there were no significant volume spikes that needed frequent adjustment.

I tended to have the Sony HT-S400 system at a relatively high volume level most of the time, but there was always room to go further if needed. At very high volumes, the sound tended to lose a bit of refinement, but this isn't a volume level you'll often, if at all, need to get to. The 60 percent volume level was adequate for most content for me, but I did push it to up to 75 percent for certain dialogue-focused content such as Better Call Saul and Masaba Masaba.

The buttons at the top of the bar speaker control the basics, including power, volume, and source selection

The sound also felt very balanced, with the subwoofer feeling like the optimal size and output for the bar speaker. The bass never felt too aggressive as is often the case with budget and mid-range soundbars, yet it didn't feel held-back or inadequate either. It is possible to adjust the volume of the just the subwoofer using the remote, but I found the default level to be fine for the most part, and I adjusted it only occasionally when I needed to keep the volume low and couldn't hear dialogue very clearly .

The Sony HT-S400 has something the brand calls 'S-Force Pro Front Surround', which is said to offer a virtual surround sound effect with only the front-facing speakers. This wasn't really the case in my experience, with no significant effect of sound coming from the rear or even the sides, even from the Sound Field mode. The Voice and Night modes (which can be selected via the remote) made the sound more voice-focused and softer respectively, but not by much.

The 2.1-channel setup meant that the Sony HT-S400 soundbar system performed reasonably well with music, whether from the connected smart TV or over Bluetooth. The loud output, spacious soundstage, and balanced sound were enjoyable for a moderately sized room even at low volume levels, and the ability to tweak the subwoofer volume for a bit of extra attack and punch was quite useful.

The Sony HT-S400 soundbar might be a bit under-equipped and lacking in features, but this isn't necessarily a bad thing. Where the soundbar shines is in its simplicity of setup and use, loud and balanced sound, and sensible price for what's on offer. That said, the lack of advanced audio format support and surround sound (real or virtual) are things to keep in mind, as is the fact that this is really a 2.1-channel speaker system built to work like a soundbar.

Get the Sony HT-S400 if you have a budget of around Rs. 25,000 and need something that adds volume, attack, and drive to your home entertainment setup. You can also consider options from brands such as Polk Audio and JBL, but Sony's straightforward approach and focus on the core functionality makes the HT-S400 worth looking at.