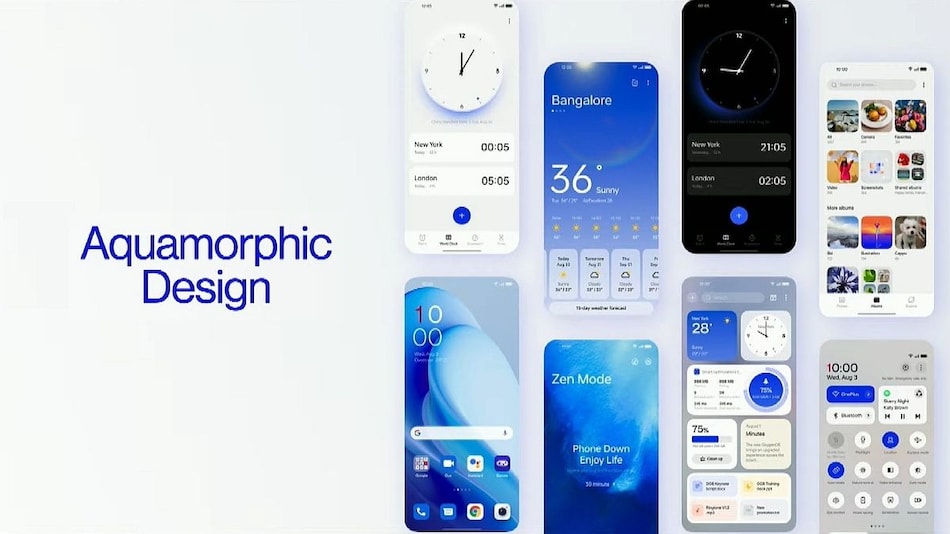 OxygenOS 13 was unveiled by OnePlus today at the New York City launch event. The OnePlus 10 Pro will be the first smartphone to feature the new Android 13-based skin. According to the company, OnePlus 10T will receive an update to OxygenOS 13 later this year. The next version of OnePlus' skin for its smartphones will bring a redesigned user interface with round edges for app icons, widgets, and notifications, making it relatively easier to adapt to, as per OnePlus. The company also said that the new version of the OxygenOS features a new “Aquamorphic” design.

OnePlus has unveiled the OxygenOS 13 along with the OnePlus 10T 5G at its New York City launch event today. The new OxygenOS is said to be inspired by nature and it features Aquamorphic design. According to OnePlus, the Aquamorphic design literally means like-water. The focus of OxygenOS 13 is claimed to be providing a bloat-free user interface and a burden-less experience. OnePlus said that it had to make about 595 improvements to OxygenOS 12 to ensure consistency with the upcoming OxygenOS 13 update.

OxygenOS 13 is said to bring a redesigned UI experience to OnePlus smartphone users, according to the company. Now, the app icons, notification windows, and widgets will feature round edges. According to the company, round edges are relatively easier to adapt to than sharp edges. The task manager will display the running apps with a floating effect. This effect will also be seen for the widgets and app notifications.

OnePlus is also bringing changes to the always-on display (AOD) feature with OxygenOS 13. It has introduced three new AOD user interfaces called Canvas AOD, Insight AOD, and Bitmoji AOD. Moreover, OnePlus has partnered with Spotify to bring the app's widget to AOD. This will enable users to simply switch between tracks and control their music directly from the AOD. Users will also have access to a “food delivery” AOD mode, according to the company.

The Chinese company is also bringing several improvements to the existing features. OxygenOS 13 will offer an improved Smart Launcher, Zen Mode, and Fast Pair. The updated AI Booster is said to offer 30 percent more fluidity, 20 percent faster app installation, and 10 percent faster app launches. The Smart Launcher is claimed to boost a user's phone management efficiency as well. The sidebar window has also been improved, according to the company. Tapping on All will allow users to quickly view all the apps, tools, and recently used apps for easy access. The Nearby Share feature has also been improved with reduced latency and faster transfers, OnePlus says.

Google and OnePlus have collaborated to provide an advanced Android Safety System. Users will be able to authorise the display of pop ups, and they will also have more control over notifications from individual apps — which is an Android 13 feature. A virtual lock box with OxygenOS 13 will isolate the files from other apps. The collaboration has also helped OnePlus to bring Audio Switch to the OxygenOS 13. OnePlus is also bringing a Spatial Audio feature to the new OxygenOS that adapts based on the direction and movement of a user's head, which sounds similar to features offered by Apple and Samsung.

Government Hopes to Pass New Data Bill by Budget Session, IT Industry Seeks Participation in Consultation
Apple Said to Delay Release of iPadOS 16 Update by About a Month; iOS 16, watchOS 9 to Debut in September